Car insurance is required by Hawaii car insurance laws. Drivers have no other choice but to purchase car insurance while living in Honolulu. They must purchase the minimum requirements that the state of Hawaii has written for them.

Find out Hawaii laws, know the ways to save on insurance, and enter your ZIP code to find FREE car insurance quotes instantly!

How does Hawaii no-fault insurance work? Honolulu is part of one of twelve states in the country that doesn’t operate on a tort system; this means that lawsuits are kept to a minimum when people hit each other while they are driving.

PIP, or Personal Injury Protection, is insurance that covers bodily injury of each driver and their passengers. Even if the other driver is at fault, your insurance will be covering your medical costs.

Because property damage falls under the tort system, one driver does have to be found at fault in order for one Honolulu car insurance company to be required to pay innocent drivers for their vehicles’ repair bills.

Therefore, lawsuits can move forward through the courts for property damage if there is a question as to who may have caused the accident.

Which city you live in will have a major affect on car insurance. That’s why it’s vital to compare Honolulu, HI against other top US metro areas’ auto insurance rates.

These states no longer use gender to calculate your car insurance rates — Hawaii, Massachusetts, Michigan, Montana, North Carolina, and Pennsylvania. But age is still a large factor because young drivers are considered high-risk drivers in Honolulu. HI does not use gender, so check out the average monthly car insurance rates by age and gender in Honolulu, HI.

Factors affecting car insurance rates in Honolulu, HI may include your commute, coverage level, tickets, DUIs, and credit. Controlling these risk factors will ensure you have the cheapest Honolulu, HI car insurance.

What is required of drivers in Honolulu?

The fact that Honolulu is in a no-fault state doesn’t preclude drivers from buying liability coverage like drivers who live in tort states must do.

Honolulu drivers are not completely prohibited from suing each other; instances exist when drivers will be warranted in bringing lawsuits against another driver, and these drivers may need to use their liability coverage if they lose in court.

For the rare occasions that people may be taken to court due to bodily injuries they have caused other people, $20,000 bodily injury insurance is required.

If more than one person is hurt and decides to sue or file a claim with the insurance company, $40,000 bodily injury coverage will be necessary.

The first step when people have car collisions will be for them to take advantage of their PIP insurance coverage. For this purpose, they will need to have purchased $10,000 worth of this coverage. Property damage liability coverage will need to be at least $10,000.

When people are ready to purchase their liability coverage and PIP insurance, they will need to choose a good auto insurance company and good car insurance coverage.

Some companies fall short in making their customers happy with their service. It may be that their policies were purchased at a cheap price and what they received in return was cheap service.

For example, after an auto accident, drivers will need to file a claim with their auto insurance companies to receive payment for their hospital bills.

If the auto insurance company fails to answer its phone calls and takes too long to pay the claims, its customers will not be able to give them glowing reviews.

These are the companies that drivers will want to refrain from approaching for their needs.

One of the best companies for satisfying their customers is Geico. This auto insurance company, which has agencies in Honolulu, received very high ratings from J.D. Power and Associates Auto Insurance Study.

Another of the auto insurance companies that has high ratings is State Farm, and Honolulu drivers won’t have difficulties finding a State Farm agency from which to purchase their types of car insurance coverage.

Obtain Lower Rates by Being Proactive

When someone buys car insurance in Honolulu, they need to be aware of how much the average policy costs. If drivers are being quoted the highest rates, they will need to understand why.

It’s possible that they will be able to do something about whatever is causing their high premiums.

Sometimes, it’s the age of the person that makes rates go up, but other times it’s because:

The three reasons listed above that can provoke high auto insurance quotes can be addressed by the car’s owner.

If the car is one of the most stolen vehicles in Honolulu, such as the number one stolen vehicle, the 2000 Honda Civic, the car’s owner can have an alarm system installed.

The car owner also has the option of placing LoJack within the vehicle that will help police track its whereabouts.


If the vehicle is being parked on the street, this is placing it in a vulnerable area where it can be stolen.

If the car owner can manage to park the vehicle within a garage, auto insurance companies tend to offer low car insurance rates because this tends to be a safer place.

After these car owners have made these changes, they may be able to receive more average car insurance rates in Honolulu.

Honolulu is a city that suffers from a lot of crime. Property crime overtakes the numbers for the rest of the country; this includes car theft.

In 2014, 21 fatalities resulted from car collisions with six of them being the fault of a driver who was driving under the influence.

The wisest thing that people can do before they purchase their liability coverage and PIP insurance is to seek several quotes from the many auto insurance companies that make their home in Honolulu.

In Honolulu, drivers need to have liability coverage plus PIP insurance, but they are also recommended to have insurance that will pay their medical bills and property repair bills if they are hit by someone who doesn’t have insurance.

The recommendation, not the obligation, is to also purchase insurance against the possibility of being hit by someone who is underinsured.

An underinsured motorist has purchased car insurance for the minimum amounts required, but not enough to cover the actual costs of the crash.

If the medical bills amount to more than $20,000, the hurt driver’s underinsured policy will cover the rest of the bills up until the limits of the policy.

Although the state only recommends that people purchase uninsured motorist/underinsured motorist coverage, they have determined an amount of coverage that they believe to be adequate for those who decide to add it to their policies.

What is the cheapest car insurance in Hawaii? Our ZIP code comparison tool lets people see how much they will be charged for liability coverage, PIP insurance and Underinsured/Uninsured Motorist coverage for no cost.

We will even take into account the Honolulu DMV. Conveniently, a person can see if it’s possible to purchase all of this insurance at once. If it isn’t, they can easily remove the optional coverage and ask for quotes again.

They can do this as many times as they want without ever being charged or ever being required to talk to anyone at the insurance company.

The comparison tool is there to make purchasing car insurance online a completely painless affair that can be started at any time. Enter your ZIP code below and find affordable coverage for FREE! 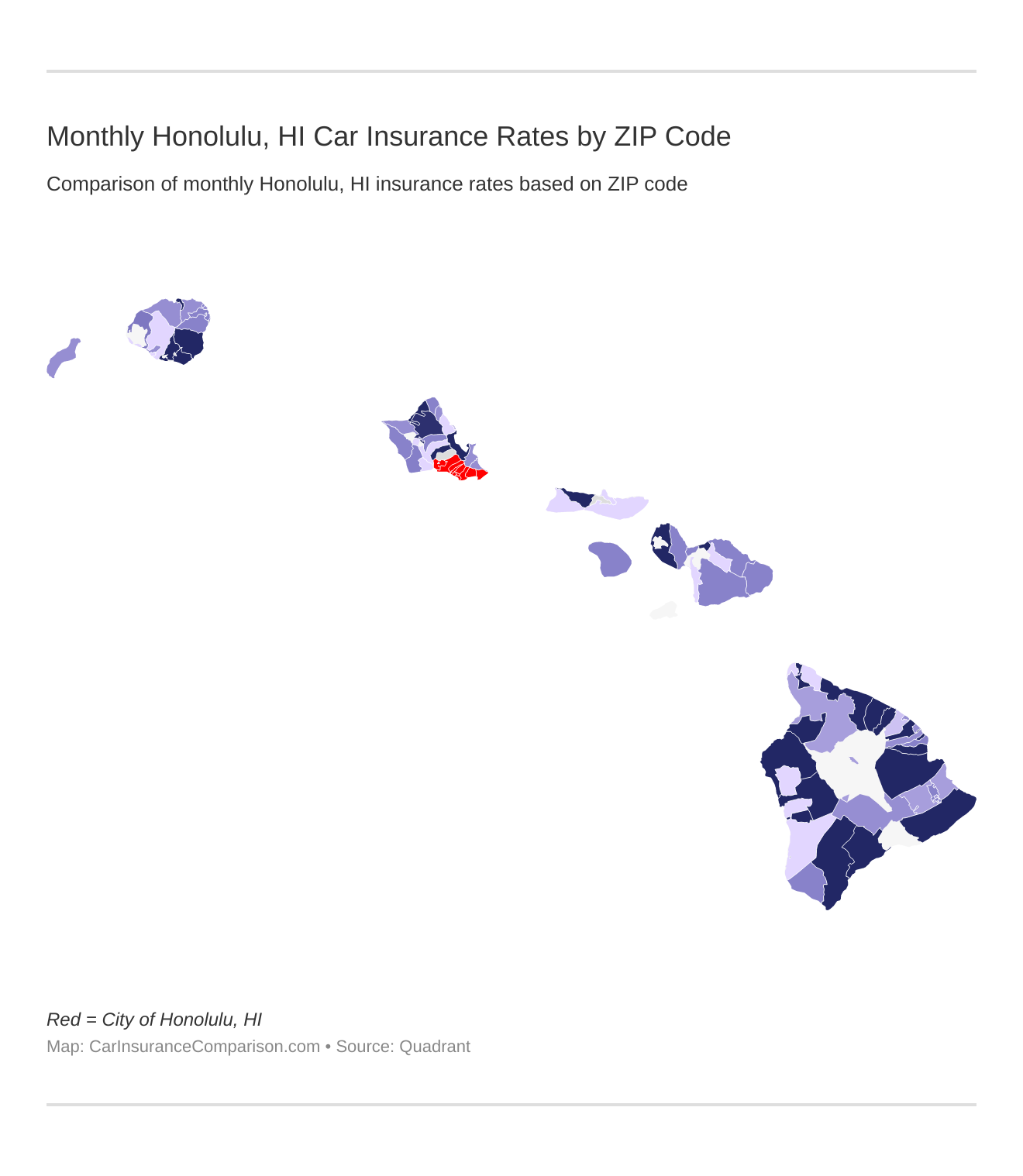 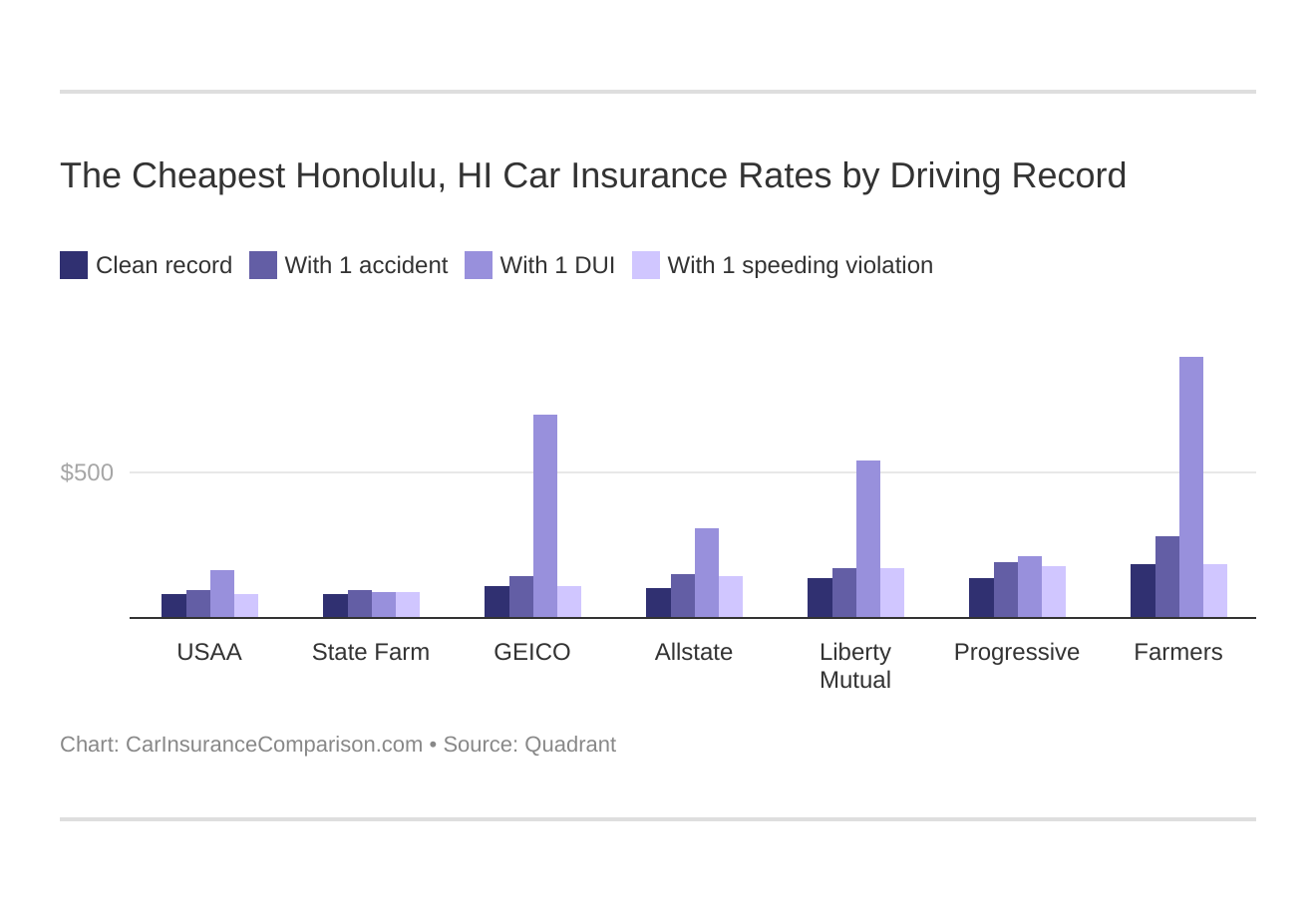