Advertiser Disclosure: We strive to help you make confident insurance decisions. Comparison shopping should be easy. We partner with top insurance providers. This doesn't influence our content. Our opinions are our own.

“Life is a Highway” is even a hit with the kids thanks to the award-winning Cars movie, released in 2006. Consider the opening lyrics:

“Life’s like a road that you travel on,
When there’s one day here and the next day gone…”

A motor vehicle accident can end your life without warning in a matter of seconds.

Americans spend an average of 17,600 minutes driving each year, and every 12 minutes a person is killed in a car accident on our nation’s roads.

Car accidents happen everywhere, but some of the roads in our country are proving to be much more dangerous than others.

The 10 States with the Most Dangerous Highways

With 1.3 million people dying in traffic accidents each year and that death count on the rise, we have a serious safety concern on our hands.

That’s why our researchers compiled over 8,500 data points using the leading resources: NHSTA “crashstats,” FARS totals, the reports published by the U.S. DOT and FHWA, as well as the IIHS “Fatality Facts” to see what’s causing all these unnecessary deaths in our country.

All 50 states and the District of Columbia were ranked according to six complex, statistic-based factors explained in detail here.

Read on to find out which states have the most dangerous highways and what’s making them so treacherous.

In our Most Dangerous Highways study, Texas ranked 20th in 2012, 11th last year, and now 10th.
It is scary to think where the Lone Star state will find itself next year.

Texas’ nickname and state flag represent pride, defiance, and independence. The problem is when Texas residents defy the law risking the safety of others.

Even though Texas has the fastest speed limits in our country with many roads allowing 85 mph, residents are still breaking those already lax laws and traveling at speeds as high as 209 mph!

With 1,105 people killed due to speeding in 2015 alone, Texas drivers need to slow down and find other means to illustrate their independence.

Over a decade ago, Colorado’s transportation situation was considered a “quiet crisis.”

Ranking in the worst half of the U.S. for speeding deaths, failing to wear seat belts, unsafe highway bridges, number of fatal crashes, and lack of federal funding.

Colorado’s crisis is far from a quiet one today. According to The Denver Post, “Declining revenues coupled with booming population growth has put the state’s motorists on a collision course with potholes and congestion.”

The Colorado DOT estimates that $9 billion will be needed over the next ten years for highway repairs, and so far only $1.9 billion has been approved for this crucial maintenance.

Hopefully Colorful Colorado will invest the necessary greenbacks so the colors it’s known for don’t include bloodshed on its neglected highways.

Massachusetts ranks in the top three worst states in America for failing to wear seat belts, having unsafe highway bridges, and for getting insufficient federal funding.

While many states gets half of their highway spending from federal aid, Massachusetts only gets 21.5 percent, which means there isn’t much hope for all those unsafe roadways.

Fortunately despite this lack of funding, the Bay State has managed to keep traffic fatalities at bay. Massachusetts had 306 people killed in car crashes out of its 6.8 million residents, which was the lowest death rate for any state—beat only by D.C.

Since 2011, West Virginia has gotten an annual average of 25 cents per resident in federal funding for highway improvements, which makes Massachusetts’ nine cents a person average, seem like a bad joke.

Sadly, the $2.3 million the government deposited into West Virginia’s highway trust fund from 2011-2015 didn’t stop the 1,548 people from being killed in car crashes those very same years.

The Mountain State’s problems don’t end there. West Virginia is ranked in the worst half of the U.S. for interstate speeding deaths (37th), failure to wear seat belts (26th), poor highway bridges (32nd), and its per capita death rate (43rd). 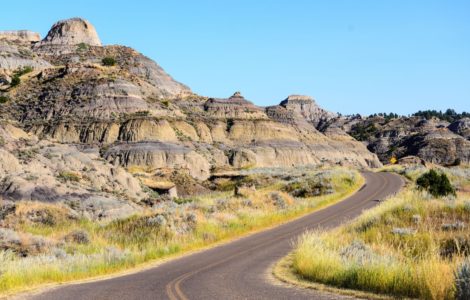 Montana gets even more help than West Virginia from the federal government with maintaining its highways.

From 2011 to 2015, Montana got an average of 43 cents a person in highway federal funding, which allowed for over 64 percent of its total highway spending to come from federal aid.

Like we saw with West Virginia, all that money didn’t keep Montana’s death rate down. From 2011 to 2015, Montana had 1,059 people killed in car crashes.

Ranked 48th in the U.S. for not wearing seat belts, Montana residents aren’t doing their part to keep themselves safe either. Which is why the Montana MythCrashers made a funny, yet inspirational video with the message: “Seat belts are as important as life itself.”

Hopefully , Montana residents will take that lesson to heart, because like he explains in the video:

“There’s no way you’re going to be able to brace yourself in an accident.  At just 35 mph you’ll be hitting at the same force as if you jumped off a four story building.”

Not only was North Carolina on this Worst Highway top 10 last year (6th place), but it also landed on our latest States with the Worst Drivers top 10 (8th place).

Receiving only 10 cents per resident in 2015 federal aid towards its highway spending, the Tar Heel state isn’t getting the help it needs to maintain safe public roads.

As you can see in the above video, NCDOT is clearly putting in the effort to improve statewide traffic safety. Here are just some of those safe-driving initiatives:

The main reason North Carolina landed on our Worst Driver Top 10 was because of speeding, and ranking 41st with 547 total speeding fatalities in this study, it remains a major problem across the state.

Hopefully North Carolina residents will heed all the laws and warnings their dedicated department of transportation has put in place.

The primary reason Pennsylvania, the Keystone State, has ranked in the top four states with the Most Dangerous Highways (two years in-a-row!) is because of its unsafe bridges.

This is ironic considering the meaning behind its nickname:

Every year since 2011, Pennsylvania has had at least 37 percent of its highway bridges rated as deficient by the Federal Highway Administration.

The Keystone State seems to be missing some highway bridge keystones.

Even Pennsylvania’s best ranking factor in our study (Death Rate: 22nd) has great need for improvement. On average, an alarming 1,240 people have been killed on this state’s public roads every year since 2011.

O’Callaghan/Tillman Bridge over the Hoover Dam

Tragically, Arizona’s two factors that make its highways some of the most dangerous in the U.S. both involve highest number of deaths.

As you can see in the graphic Arizona police chase footage above, crashes that involve speeding greatly intensify the sustained injuries and risk of death.

Most of the drivers in the Grand Canyon State aren’t fleeing officers and cruising on the wrong side of the road while also speeding, but what we all need to remember is that speeding alone is enough to cause a horrific crash that kills people.

On a more positive note, only 11 percent of Arizona’s bridges were determined deficient in 2015.

Click here to enjoy a fascinating time lapse video of the Hoover Dam Bypass Bridge (pictured above) being built from 2006 to 2010.

Our study revealed major safety concerns for the Palmetto State that are much scarier than the cockroach who invades homes in this state and even has the same name.

South Carolina is ranked in the top 10 worst states for three major categories:

In 2015 alone, South Carolina had 977 total people killed in traffic accidents, and 361 (37 percent) of those deaths were caused by a driver who was speeding. This is a rate of 20 people killed in car crashes for every 100,000 residents.

It’s wonderful that from 2011 to 2015 an average of 89.96 percent of South Carolina residents wore their seat belts.

The devastating reality is that seat belts can’t solve South Carolina’s deadly highway problems. The data shows that despite South Carolinian’s dedication to buckling up over the years, people are still dying on these roads at astronomical rates.

Downtown Shreveport over the Red River

For the second year in-a-row Louisiana has had the Most Dangerous Highways in the entire United States.

Even with an average of 16 cents per resident given each year in Federal Aid towards road improvements from 2011-2015, Louisiana’s highways are still the deadliest in America.

It’s too bad people can’t fly around like the birds in the Pelican State, because with 726 people killed in car accidents in 2015 alone, driving on Louisiana’s roads is no picnic.

This Most Dangerous Highways study isn’t the only one Louisiana is the star of. Louisiana has also landed on our Worst Drivers in America countdown every year. In 2011, 2013, and 2016 our detailed studies found Louisiana to be home to our nation’s worst drivers.

As you can see in the above news clip, America’s Most Dangerous Highways mixed with the Worst Drivers of the nation equals a recipe for deadly disaster.

Only four states from this Worst list ranked in the top 10 in the U.S. for a category Best, here they are:

Before we start the celebrations, lets realize that those four states having such good “Best Rankings” means they had exceptionally bad “Worst Rankings” to give them total scores that landed them here. And, two of those above Bests are just how much money they get from the U.S. government.

It’s also important to see which factors make the highways in these ten states so dangerous, and which ones are their saving grace.

This study also reveals the effects Federal Funding has on our nation’s highways, but not always the way you would expect. This government aid is a highly-debated topic that will likely see considerable change under our new president.

“With the Trump administration now in office, highway policies might be changed before the current highway bill runs its five-year course,” says DownsizingGovernment.org, part of Cato Institute.

They also mention, “The administration’s 2018 budget proposes new directions for transportation policy, including cutting regulations to speed the completion of projects and attracting more private financing for infrastructure investments.”

No amount of research, studies, campaigns, or initiatives can bring about change like you can behind the wheel.Highway safety starts with you.
The drivers controlling their vehicles are who hold the most power when it comes to the safety of our nation’s roads.

Top 12 Dos and Don’ts to Avoid an Accident

(Click the below links to find the Whys & How Tos)

“Stop accidents before they stop you.” – BCIC

This in-depth study is based on 2011-2015 data provided by the following credible sources:

All 50 states plus D.C. were ranked according to the following categories:

The rankings for all six categories were added up to arrive at one very telling final score.

Curious how the rest of the states stacked up? Below is a chart showing the individual scores and rankings for the six categories in this study for all 50 states and The District.

Click here for the full stats and sources for each category. For all media inquiries, please email: josh@carinsurancecomparison.com