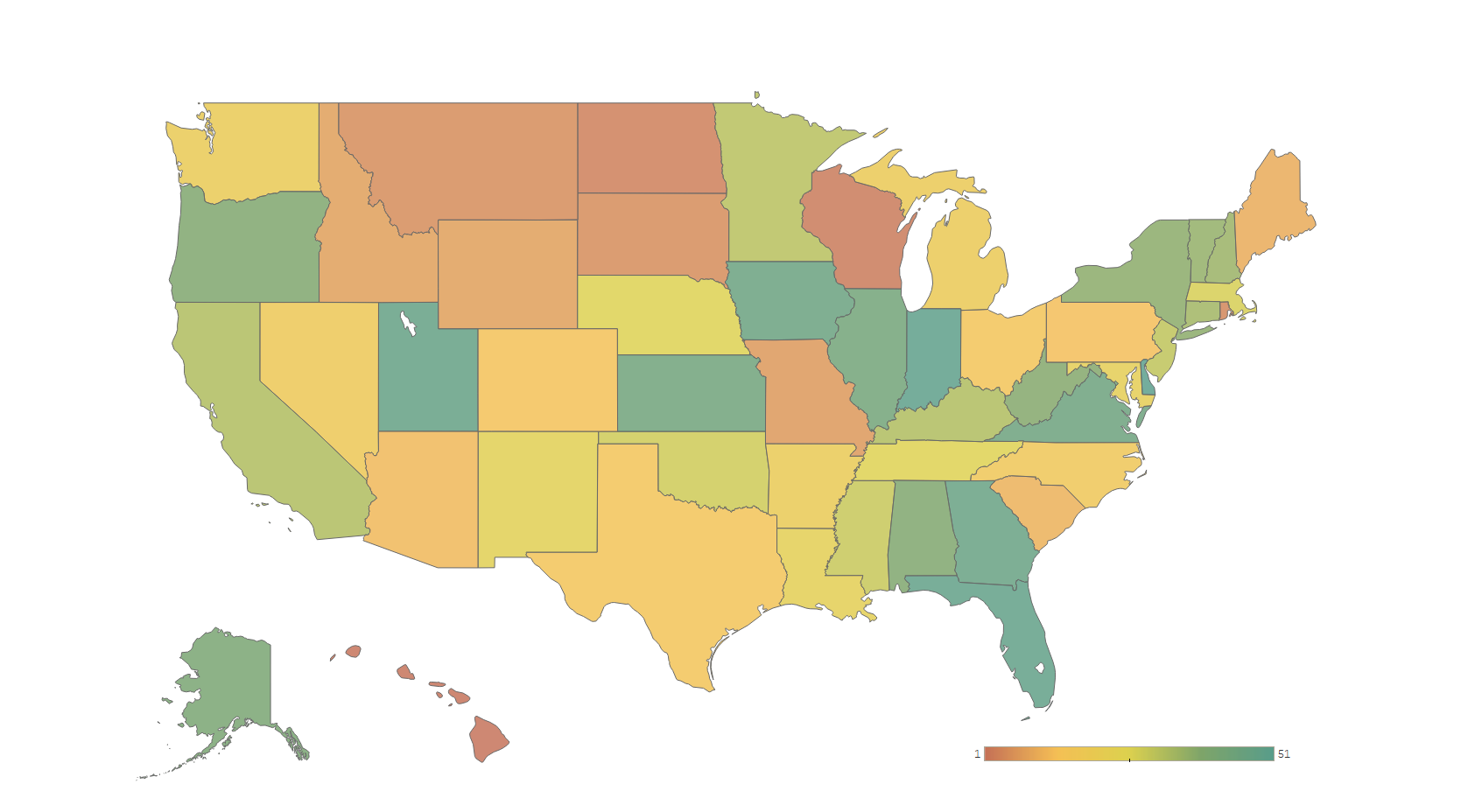 Downing a few drinks may sound like an appealing way to kick back and relax, but drunk driving can have fatal repercussions. In 2013, 28.7 million people admitted to driving under the influence of alcohol; that’s more than the population of Texas!

Not only can drunk driving injure you and others, but it can also hurt your bank account and those of your fellow hard-working Americans. Drunk driving costs each American adult over $500 a year and the entire U.S. $132 billion a year.

If you’ve ever wondered about the chances of encountering drunk drivers in your state and how much they cost you as a taxpayer, keep reading to learn about the most dangerous states for drunk driving.

Review your auto policy every six months and compare three to four policies. Don’t allow the price to be the only factor. Use our FREE comparison tool to get started today!

We based our drunk driving rankings on the following categories:

We weighted the categories below and tallied for a total score. Find out more details about our categories here. The worst states received the lowest score.

wpDataTable with provided ID not found!
For example, South Dakota was the state with the worst rating for DUI arrests (total DUI arrests per population) in 2015 and received only seven points for this category. The District of Columbia, however, had the lowest amount of DUI arrests and earned a score of 255.

We compiled all of our information using the following sources:

Our article will focus on the top 10 most dangerous states for drunk driving. However, you can access the rankings for all 50 states, plus the District of Columbia. Simply click here to view the rest of the data.

Although Utah didn’t make this year’s top ten list, it’s worthwhile to note that they are in the process of trying to lower their blood alcohol limit from .08 to .05. That would be the lowest limit in America. That change will be worth watching for next year’s study.

Coming in at #10, Maine has the fifth highest amount of DUI arrests. Perhaps that’s why it also ranks higher for DUI Penalties.

A penalty for the first offense did not have a mandatory minimum, which contributed to Maine ranking better for DUI Penalties.

This state — known for lighthouses, lobsters, L.L. Bean, and famous writers — may not boast much good news when it comes to DUIs, but hopefully next year, we’ll get to kick Maine off the list.

Wyoming sits right behind North Dakota (2nd place) and South Dakota (1st place) as the worst for DUI arrests. Fifty-four percent of Wyoming’s population (586,107 total population) was arrested for a DUI in 2015. You read that right!

Wyoming is also in 4th place for Laws/Statutes. Yikes.

Thankfully, their fatalities aren’t as numerous as some other states, but “The Equality State” still has much to improve on when it comes to DUIs.

Sliding in at the 24th spot, Idaho also did decently well for Fatality Rank. It could have been much worse!

Other than DUI Penalties, Laws/Statutes needs some work, as Idaho placed 7th in this category.

Their motto may be, “It is forever,” but hopefully that won’t be the case for DUIs! We would love to see a positive shift in their scores going forward.

Missouri was one of three states — the other two being South Dakota and Vermont — that all shared one thing in common: no mandatory minimum sentencing for a DUI’s second and third offense.

However, the laws against drunk driving don’t seem to be saving lives, which is surprising, as there are only two DUI laws that Missouri doesn’t enforce.

Or maybe what Missouri ranks in fatalities is why they have so many laws against drunk driving.

“The Show-Me State” shows some promise of inhibiting DUIs, but the people of Missouri need to carefully follow the laws to decrease fatalities.

In South Dakota, it looks like the laws enforced to fight drunk driving are not making an impact, as SD also has the worst score for DUI arrests.

But heavy penalties may make people think twice before driving drunk. After all, this state shares the 47th spot for DUI Penalties with Alaska.

Both South Dakota and Alaska have a $4,000 minimum fine for a DUI’s third offense, which is the second highest minimum fine in the country.

Indiana and Texas hold the number one spot for the most expensive minimum fine for a third offense at $10,000.

Montana’s total score of 15 points tied with South Dakota’s. But since this state is the only one that tops North Dakota with a $435.65 taxpayer subsidy, Montana ranks the worst in Cost per Fatality.

There may be more daredevils in Montana costing their fellow taxpayers the highest price per fatality in the U.S., which is not surprising considering this state is home to famed daredevil Evel Knievel.

Rhode Island may only be 1,214 square miles total, but it still packs a punch. People flock to major metro areas like Providence. More people and congested streets could equal trouble.

On the downside, Rhode Island tied with Hawaii for first place in fatalities. Unfortunately, Rhode Island also got second place for Laws/Statutes. Although this state is best at keeping down DUI arrests, its people need to brush up on the laws before hitting the road.

North Dakota might be massive as far as land mass is concerned (the 19th largest in the U.S.), but it only has a total population of 756,927.

But both the Cost Per Fatality and DUI Arrest numbers are too high. As a taxpayer, each North Dakota state resident has to pay an average subsidy estimate of $400.30 because of drunk driving fatalities.

It’s not surprising that Wisconsin holds the second spot in our top ten, considering the role alcohol plays in this state:

Along with Wyoming and Idaho, “The Badger State” also holds third place in a Worst Ranking Factor. Overall, Wisconsin didn’t do well in the worst ranking categories: It’s also seventh in DUI Penalties and ninth in DUI Arrests.

Step it up, guys!

Now we’ve made it to number one on our list. Unfortunately for Hawaii, this list isn’t for top vacation spots.

If you’ve dreamed of saying “aloha” to this vacation destination, keep in mind that you may be in jeopardy while on the road, as Hawaii ranks number one for drunk driving fatalities.

Consequently, Hawaii’s best ranking factor is their laws and statutes against drunk driving. The only law they don’t have on the books is an increased penalty for refusing to take a breathalyzer test. This law could help a little, but there’s still much to do to prevent people from driving drunk.

Beautiful Hawaii, let’s see some major improvements by next year!

The most recent study points out cultural factors may be in play as well geography — rural western states tend to drink more beer. We can conclude that the higher rate of consumption is leading to more arrests based on this year-to-year trend.

Next, small states with a large population generally have a higher fatality rank.

Eight out of the top 10 most dangerous states for drunk driving held first through third places in their worst factors, except for Maine and Missouri, which both got fifth place in their category.

You can make an impact by choosing not to drink and drive. And if you live in one of these most dangerous states, be vigilant and encourage your friends and family to practice safe driving and — better yet — self-control with alcohol consumption.

Here are some tips if you’re drinking with friends or family:

State Farm gives these tips if you’re on the road. Watch for drivers who are:

Call 9-1-1 if you see these signs while driving or if you have a friend who you know is driving under the influence and cannot be immediately stopped.

Our study implemented weighted measures to demonstrate the impact each manifestation of a category can have on a person, community, and state. Each weight represents the severity of the category. Definitions for each category can be found here.