America typically runs on a fixed price system: You go to the grocery store or shop for clothes, and the price on the tag is the price you pay. There’s no haggling with the cashier because the only way to get a lower price is typically when the items go on sale.

But in other aspects of the purchasing world, Americans walk in ready to negotiate. Car dealerships, yard sales, and even your boss’s office are the perfect place to pull out those bargaining skills and get the deal you want.

Most people don’t know that negotiating is possible in other areas – one of which is car insurance.

Choosing your car insurance typically involves requesting a quote and deciding if it fits your budget. But what happens when people negotiate their rate instead? We surveyed over 1,000 people about how they purchased car insurance and how much money they saved (or could have saved).

Keep reading because the benefits of negotiation will probably surprise you.

Strategies to Save Money on Your Premiums

Consumers may recall the promises made by a man named Mayhem and a talking gecko in memorable commercials, but the discount programs offered by car insurance companies like “good student” and “safe driver” saved respondents just under $12 annually. Research saved consumers a bit more, averaging nearly $53 in savings per year.

Negotiating, on the other hand, was by far the best way to save on car insurance, saving drivers about $220 annually.

Start by Doing Your Research 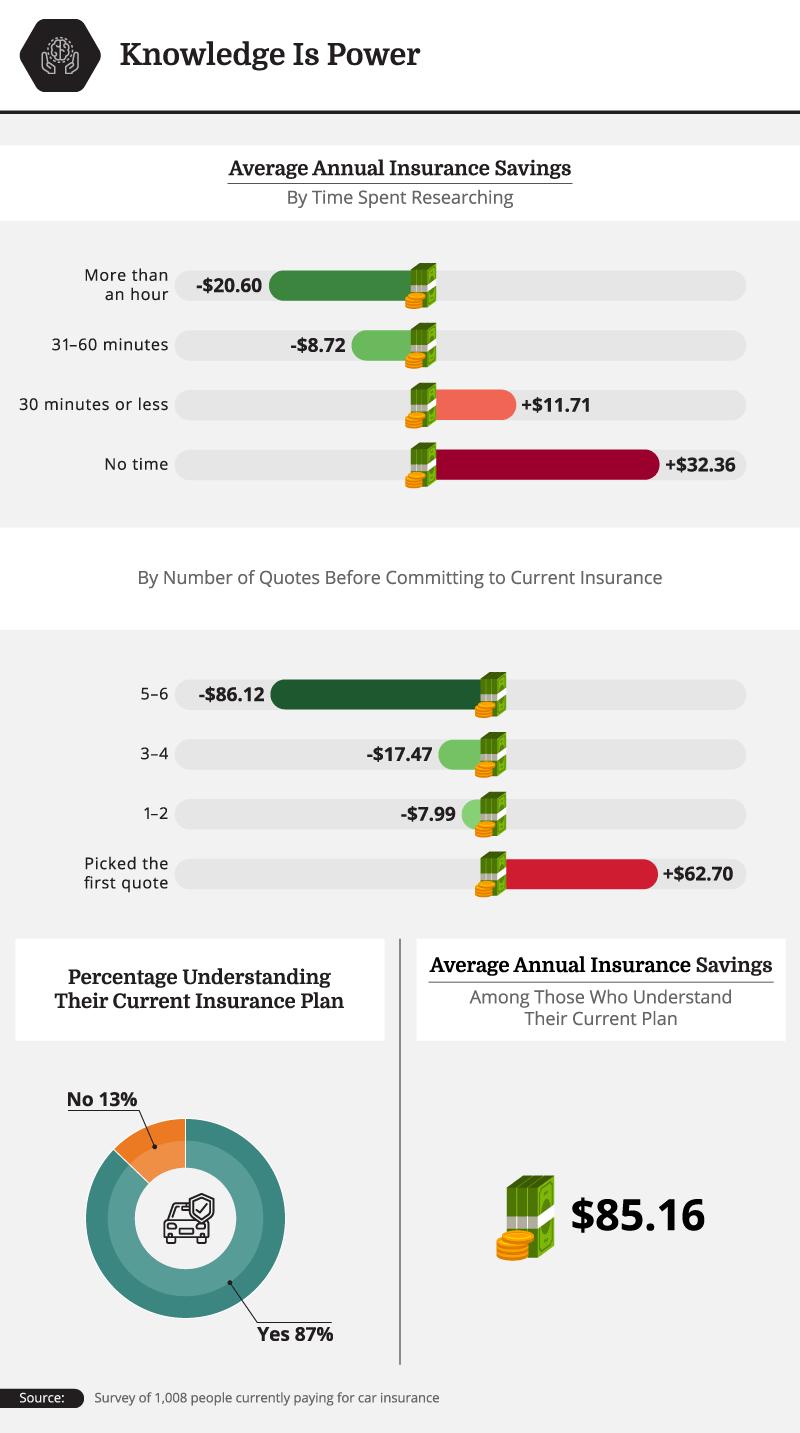 Thanks to the internet, information on buying car insurance is everywhere. From full guides about coverage to free online quotes from the top providers, researching before buying is easier than ever. Nevertheless, many people forgo the background knowledge.

Just 31 to 60 minutes of research saved auto drivers an average of $8.72 annually. Bump the time to at least an hour and savings more than doubled, with drivers saving $20.60 on insurance each year.

While savings increase alongside research, comparing quotes saved drivers even more. Those who purchased the first quote they received spent an average of $62.70 more annually, while annual savings for those who looked at just one to two quotes increased by nearly $8. Collecting five to six quotes before settling with a plan seemed to be the sweet spot – drivers who viewed at least five quotes paid $86.12 less per year.

Picking the lowest priced quote may seem like common sense, but it’s also important to understand the coverage you’re getting. Luckily, 87% of drivers were aware of their car insurance plan, and understanding their policy saved them over $85 per year.

By understanding the different types of coverage, drivers can pick the policy that best fits their needs and not pay for things that won’t benefit them.

Dropping insurance coverage may be a common way to save on annual premiums, but negotiating with companies can lead to significant savings without sacrificing protection.

Those who negotiated their car insurance rate saved an average of nearly $220 annually, yet 58% of drivers didn’t haggle with their providers.

Negotiation techniques vary depending on the product, and citing competitors and threatening to leave can be common when buying a car. However, while mentioning competitor rates saved respondents close to $30 annually on their car insurance, threatening to take their business to a different insurance provider wasn’t as successful.

In fact, not threatening to leave saved drivers more money – those who threatened to leave their current provider paid over $67 more per year compared to those who didn’t. 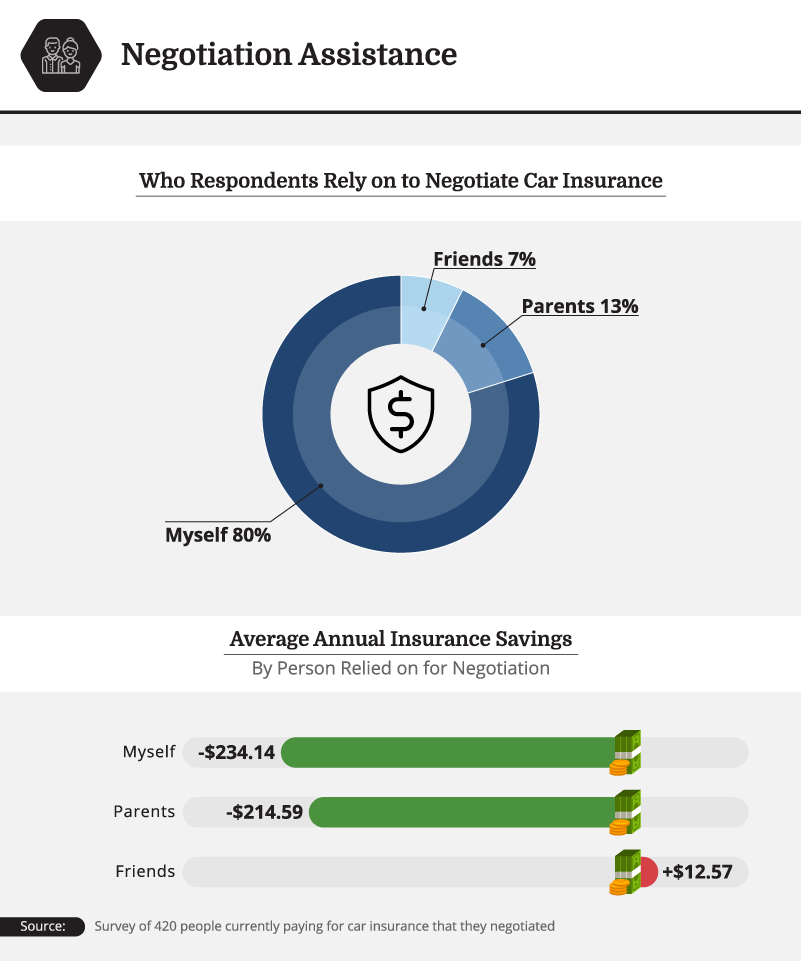 Regardless of the negotiation technique, haggling success comes down to the person. Considering men see better results from negotiation than their female counterparts, it may seem obvious to turn to a male family member or friend to help snag a deal.

Take note: our study found the best deals were achieved when drivers relied on themselves to negotiate.

While 80% of people negotiated without any help, 13% turned to their parents for support, and 7% brought a friend to the table.

Remember, It Doesn’t Hurt to Ask Like any other business, car insurance companies are concerned with attracting and keeping customers. While this often boils down to affordability, cheaper car insurance may only provide minimum coverage and cost drivers in the long run.

Taking advantage of discounts is the safer way to lower annual premiums while ensuring coverage stays the same. But with so many discount options, it can be difficult for consumers to know what they are eligible for.

Generally, the only way to ensure the best possible deal is to do research. Seventy-seven percent of drivers asked about available discounts when setting up their insurance. And those who did saved an average of $11.49 annually compared to those who didn’t.

Get a Bargain from the Comfort of Your Home 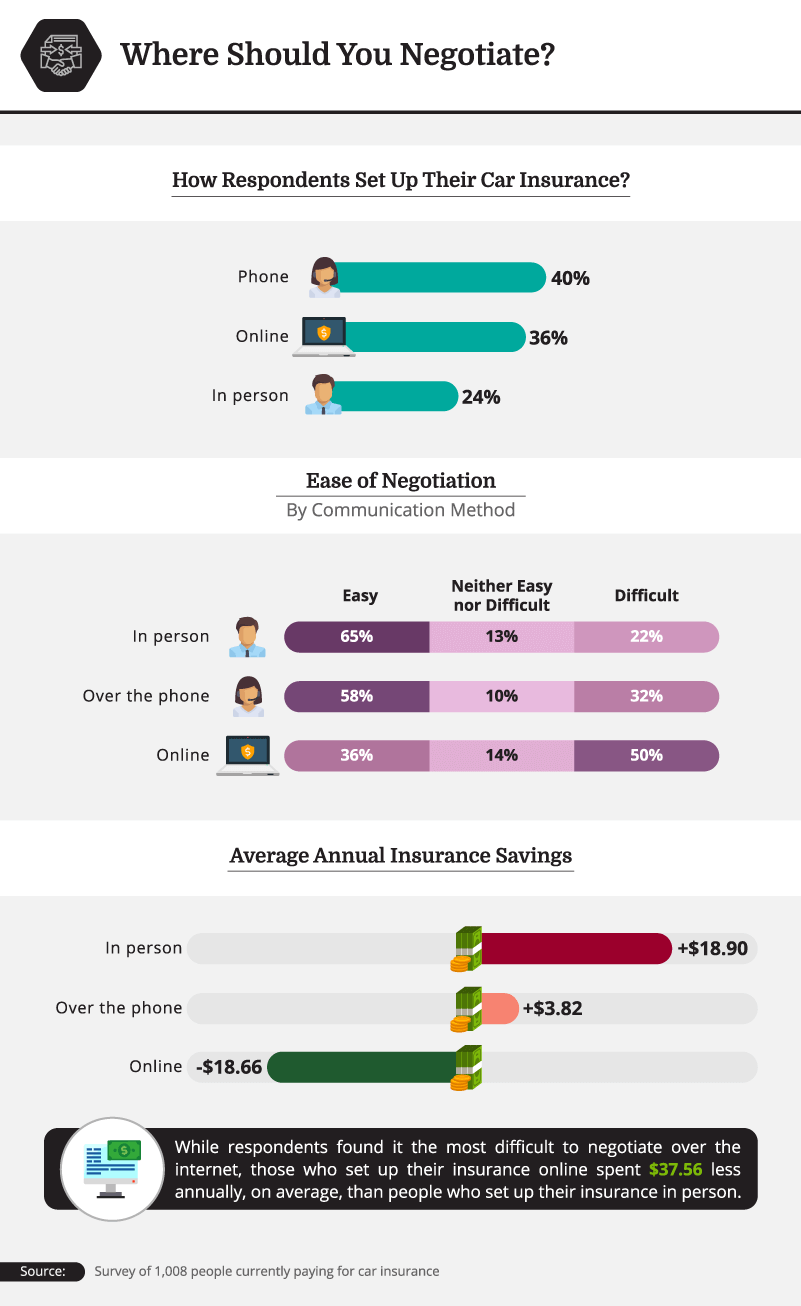 Thanks to the internet, researching car insurance coverage, comparing quotes, and even picking a plan is easier than ever.

But are buyers also negotiating online?

The majority of respondents picked up the phone to negotiate a better deal, while 36% of people kept their negotiations online. Despite a change toward a more online world, 24% of people opted to negotiate a deal in person.

When it came to savings, those who set up their insurance online spent an average of $37.56 less annually compared to those who set it up in person.

Should I switch providers to lower my rates? 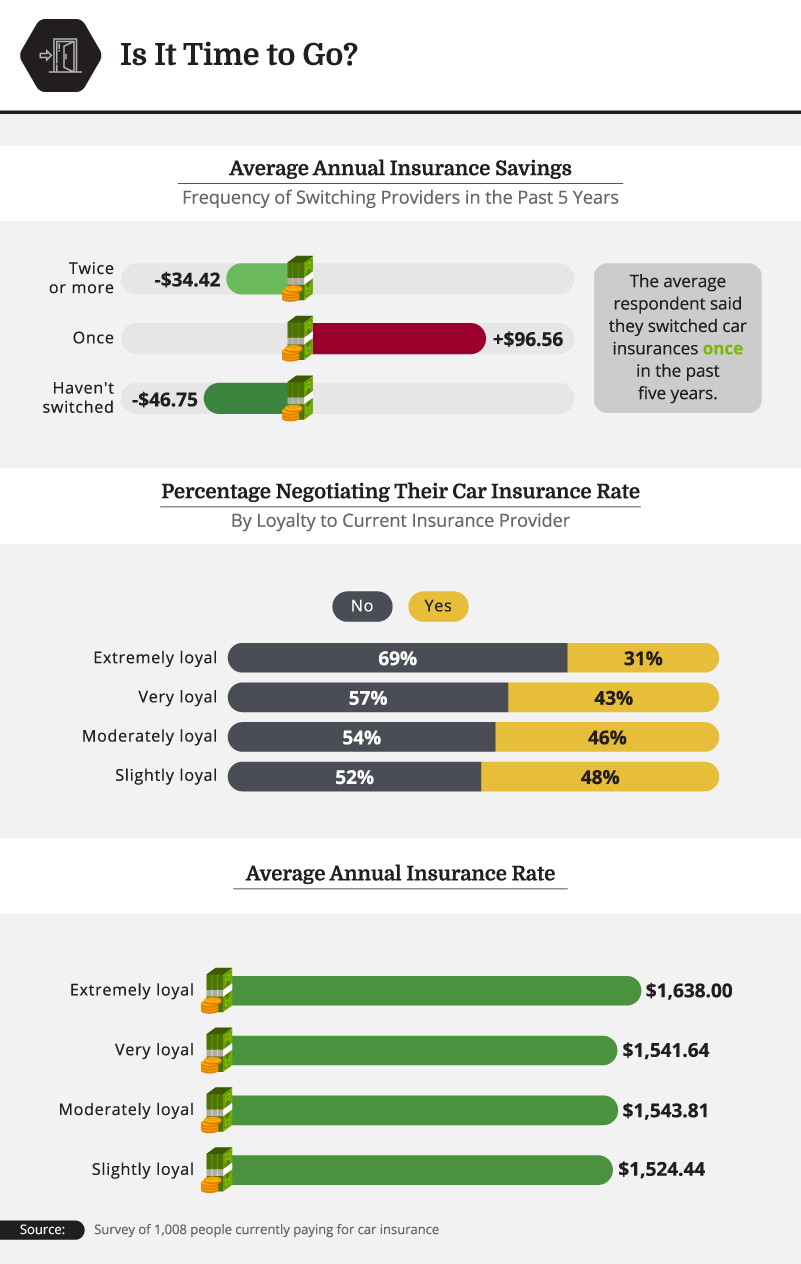 Switching car insurance providers can be a smart decision for getting a lower premium, but Americans seem to be loyal to their current providers.

The average respondent said they switched car insurances just once over the past five years. While switching providers can be beneficial monetarily, switching too often isn’t good either.

Loyalty to a provider doesn’t mean accepting their rates without question, though. Respondents who said they were extremely loyal to their providers were the least likely to negotiate, and those on the upper end of the loyalty scale paid the most for car insurance each year.

Compared to an annual premium of $1,524.44 for those classifying themselves as slightly loyal, self-professed extremely loyal customers paid an average of $1,638 annually.

There’s no denying that car insurance is expensive.

Doing research before buying, comparing quotes, and negotiating for lower rates are the best ways to ensure you get the most bang for your buck.

With so many providers, plans, and available discounts, though, starting the search can be intimidating. That’s why Car Insurance Comparison is here to make the process simpler.

Enter your zip code and compare hundreds of quotes from the top car insurance companies to find the plan and rate that work best for you. Visit us online to start your search and put your negotiation skills to the test.

To perform this study, we surveyed 1,008 people using Amazon’s Mechanical Turk platform. To qualify for the survey, respondents had to be currently paying for the car insurance on their vehicle.

If respondents failed an attention-check question that was located about halfway through the survey, they were disqualified and their results were excluded.

Self-reported data have some limitations. They include, but are not limited to exaggeration, telescoping, and selective memory. We can’t be sure closely our results line up to reality.

As we saw in this study, negotiating insurance rates may seem difficult to do, but in the end, it pays off. Do you know what else pays? Sharing our results with your readership. All we ask is that it is for noncommercial purposes and that you link back to this page.