Insurance Costs for the Most Famous Hollywood Movie Cars

They never get billing in the credits, but tricked-out cars are often movie characters in their own right — especially cars that go really fast or are crucial to the plot.

Could you imagine how much some of these incredibly sweet Hollywood movie cars would cost to insure?

To find out, we exhaustively researched how much it would cost to insure these famous movie cars, based on the rates of real cars on the road.

Check out some of these amazing automobiles along with some famous movie car pictures and videos and their estimated car insurance rates.

Even if you can only dream of having one of these famous cars (join the club), see how much you save on your car insurance by entering your ZIP code and getting a FREE comparison online now!

The Wagon from Ghostbusters

The famous Ghostbusters wagon was actually a Cadillac Miller-Meteor that had an ambulance conversion done to it. Seems like a perfect fit for busting ghosts.

Although ambulances typically have really high insurance rates, we’ll just go with a run-of-the-mill Cadillac for this ghost-capturing machine.

The General Lee from The Dukes of Hazzard

The Duke cousins were known for driving in an unsafe manner that would definitely put them into the “risky driver” category. But still, what’s the fun in life if you don’t take risks from time to time?

Although driving a sporty car is always more expensive than driving a sedan, at least there’s a little fun for your commute to work.

The Tumbler from Batman

Unless you’re an ubergeek, you’re probably not aware that the vehicle in the uber-expensive Batman series is not called the Batmobile, but the Tumbler.

Despite the variety of crazy weaponry on this car, we’re sure that the safety features would likely get you some Volvo-level rates on insurance.

The Ferrari from Ferris Bueller’s Day Off

Ferris Bueller once took a day off and ended up totally destroying an awesome Ferrari. This was after it was joyridden by a couple of Chicago valets, proving that you should never trust a valet with anything nicer than a Dodge Dart. Or a station wagon.

Anyway, that’s what you get for skipping school!

Mini Coopers from The Italian Job

Both the original and the sequel of The Italian Job featured the Mini Cooper in some of the most exciting chase sequences caught on film.

Both films (seen in the clip above) used matching Minis in red, white, and blue to help our heroes pull off their final heist and evade their captors.

The Trans Am from Smokey and the Bandit 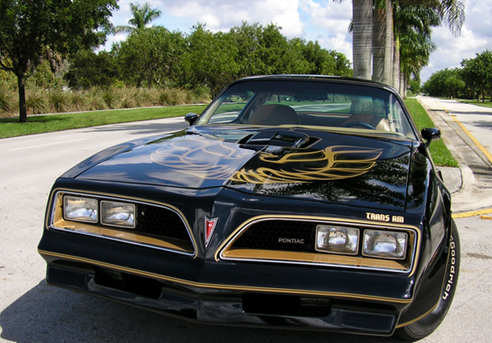 Smokey was the cop, and Bandit was the … well, the Bandit. But the real star of the movie was this car, a 1977 Pontiac Trans Am Special Edition. We think it’s special regardless of the edition because this is a mean-looking American car with an actual bird of fire painted on the hood.

Make sure to check out the FREE comparison tool below to find and compare auto insurance rates easily!

Remember Herbie? He was the talking car in the iconic Disney movie, The Love Bug (not the forgettable remake with Lindsay Lohan, but the original). The real deal.

Although an insurance company would probably have some issues with someone getting a policy on a sentient car with its own personality, we’ll assume they kept that hush-hush.

Remember Steve McQueen? He was the movie star with the awesome name who drove even more awesome cars. In the movie Bullitt, he drove a totally rad 1968 Ford Mustang Fastback.

Luckily, you can still get a Ford Mustang today, and you don’t even have to have the last name of “McQueen.” James Bond is one of the best-known movie characters of all time, considering there have been over twenty movies made with 007.

While he always drives really great cars, Bond is famously known for the 1963 Aston Martin DB5 that had special features—including an ejector seat, smoke screens, and machine guns.

For civilians, it’s hard to pick up these parts on the aftermarket, unless you’re friends with “Q.”

The Gran Torino from Starsky and Hutch

The cop TV show-made-film Starsky and Hutch featured a 1976 Ford Gran Torino. Although this car is more likely to be pulled over for excessive burnouts than to be driven by real police officers -just sayin’-it makes the cop driver look pretty cool.

“Knight Rider. A shadowy flight into the dangerous world of a man who does not exist.” Doesn’t exist? Oh, he’s real. He’s really real.

But seriously, KITT (which stood for Knight Industries Two Thousand) was simply a fantastic car — a Pontiac Firebird bequeathed with the gift of intelligence.

Too bad Firebirds are extinct, and that the Pontiac brand couldn’t be saved on account of KITT. But someday we’ll have a true supercomputer on wheels. Someday!

Enter your ZIP code into the FREE tool directly below to save money on car insurance now!

The DeLorean from Back to the Future

The car from the classic Back to the Future series was a heavily modified 1981 Delorean DMC-12. The modifications included little things like, oh, time travel.

It’s likely no insurance company would touch a beast like this with a stick, since the DeLorean is no longer built and extremely rare…and it travels through time.

Yearly Car Insurance: No insurance company will protect against time travel, until the year 2679.

How much would it cost per year to keep these cars insured? This is, of course, assuming that their drivers don’t have any outstanding accident reports — dubious, given their penchants for causing trouble on the streets.

Read on to see how your favorite Hollywood movie cars stack up. 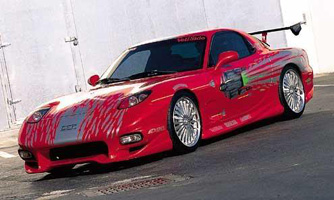 Driven by Vin Diesel’s character Dominic “Dom” Toretto in The Fast and the Furious (2001), the souped-up 1993 Mazda RX-7 was a fan favorite. Turbo-charged, nitro-boosted, and regally attired, this mean machine cemented Dom’s reputation as king of the streets of LA.

Even the sportiest Mazda cars tend to be inexpensive to insure compared to other hot rides, but this is still a hefty balance to pay. The RX-7 and RX-8 are both known as high-performance cars, making insurance more expensive for younger or inexperienced drivers.

Suzuki Samurai from The Bourne Supremacy

The Bourne Supremacy, a 2006 action flick, contains a car chase scene near the beginning of the movie involving the rugged, Jeep-like Suzuki Samurai.

This car retains an iconic cult following due to its muscular appearance and solid handling. Insurance MIGHT be a good idea for this one, considering that it ended up being driven off a bridge and submerged in water.

As a subcompact SUV, the Suzuki Samurai has a lot in common with Kia’s Sportage model. Combining the ruggedness and carrying capacity of a sport utility vehicle with the flexibility and handling of a sportier car, it is perfect for an action movie.

Its moderate insurance cost makes it easy to prepare for any car chase situation.

Hyundai Sonata from The Bourne Supremacy

The Hyundai Sonata was another car used to great effect in the India car chase in The Bourne Supremacy. Hyundai is a popular car company in India due to its inexpensive cost and high-quality design.

While the Sonata isn’t the sportiest car, Bourne shows that it can duck and weave with the best of them.

Largely due to its great accident test ratings, the Hyundai Sonata enjoys inexpensive insurance costs, making it the perfect car to get your Hollywood chase on.

Unassuming until you get behind the wheel, you imagine that taking the kids to school in the morning is an action-packed thrill ride, which, on some days, may not be far from the truth!

Smart Roadster from Knight and Day, with Cameron Diaz and Tom Cruise

This is a surprise! Very rarely do you see tiny cars featured prominently in big Hollywood action flicks.

In Knight and Day starring Tom Cruise, the ultracompact Smart Roadster shows the world that it can hang with the most muscular sports cars in a chase through narrow, cobbled European streets.

If ever you have to chase Tom Cruise on a motorcycle, you know that the Smart Roadster will help you out! This ultracompact beauty will save money on gas as well as insurance. It handles well and is extremely fun to ride, no matter where you find yourself. This concept car from BMW featured prominently in Mission Impossible 4. A plug-in hybrid, it is not meant for mass consumption — yet.

Nevertheless, that didn’t stop Tom Cruise from proving that going green doesn’t mean sacrificing sexy car chase speed. The EfficientDynamics concept car can reach speeds of up to 150 mph, and it can accelerate to 60 mph in under 5 seconds.

Car Most Resembled Today: Not yet made!

While BMW’s are traditionally expensive to insure, hybrids tend to have lower insurance costs than comparable non-hybrid vehicles. Because of the high cost of BMW hybrids, we know insurance cost will be high, as well.

Driven by the heroes in the second movie of the iconic Matrix series, the Cadillac CTS is a mid-size luxury sports sedan. It is perfect for the uber-cool atmosphere of the tech-infused world.

The Cadillac CTS is driven down traffic-snarled California highways, leaving massive amounts of mayhem in its wake.

While the protagonists of The Matrix can just dial up another one should it get totaled, you may need to purchase insurance to guard against this event.

Among the most expensive cars on this list, it just goes to show that if you want to drive in style, you have to pay the big bucks.

While the hackers in The Matrix series never have to worry about money, you may need to budget in order to afford the insurance on your Cadillac CTS! Driven in the same California car chase scene by the antagonistic silver-haired Twins, the Cadillac Escalade EXT sport utility vehicle can muscle its way through any Hollywood situation.

It was totaled in the film and never really discussed again except by insurance claims collectors after the chase. The crash scenes were cut from the special edition DVD.

Indeed, if you need a car with plenty of room for transporting family, carrying sporting equipment, or becoming translucent and slipping through matter to any one of eight separate seats, the Escalade EXT is a perfect choice. Just make sure you have the cash to cover the insurance!

Cars in action movies typically make their way through a lot of hazardous situations, and while you don’t ever see Matt Damon or Tom Cruise sitting down at their kitchen tables figuring out how much they pay to insure their hot cars, it’s an interesting concept to consider.

After all, they have to have car insurance, considering the danger they subject their car to on a daily basis.

Even if you don’t have a famous movie car to insure, you can still find cheap rates just by entering your ZIP to compare FREE car insurance quotes online now!