5 States with the Most Traffic

Home » 5 States with the Most Traffic

Merriam Webster’s dictionary defines traffic as “all the vehicles driving along a certain road or in a certain area.” But that word can hold so much more emotion especially if your state has too much of it.

There are times when traffic makes you feel like you’re going to lose your mind. Most of us have experienced this form of torture.

There’s never a good time for traffic, but it sure knows how to get us when time to spare is the last thing we have.

Some states have much more traffic than others due to having more businesses, more jobs, more people. If you can’t handle traffic in your life, either avoid these states or pick a small, quiet town then hope your town stays small and quiet.

Check your coverage before you have a run-in with bad traffic by using our FREE comparison tool above!

How we know: The US Department of Transportation compiles monthly reports from each state on total miles traveled. There are about 4,000 various traffic recorders across the US that are always counting. 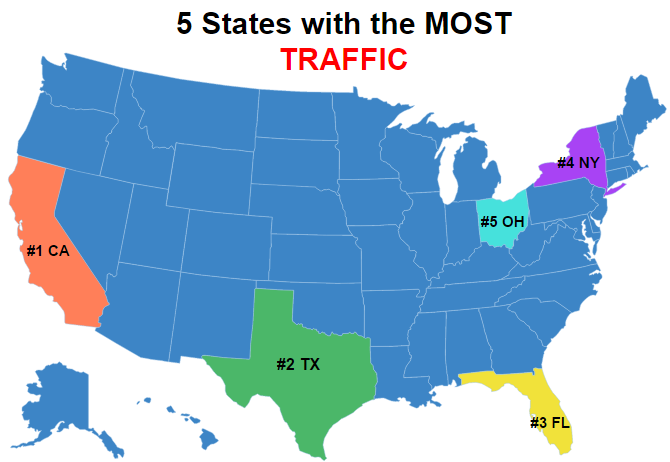 With 112,766,000 total miles traveled in 2014 alone, The Buckeye State gets fifth for US states with the most traffic. Considering Ohio isn’t even in the top five for most populated, it has an impressive amount of travel.

Birthplace to the most presidents and astronauts out of any other state, Ohio cultivates more than just traffic. Don’t leave too quickly if you’re sick of the traffic, because your child could be the next president!

New York ranks fourth-largest by population and also fourth for the most traffic in our country. The Empire State proves to have a pretty important empire to drive to and from with 129,263,000 miles of travel in 2014.

New York must have known it would be a leader in our nation’s travel, being the first state to require license plates on vehicles as far back as 1901. If you want a piece of the Big Apple, I guess traffic is just the name of the game.

The Sunshine State ranks third for states with the most traffic in America. With a total of 201,040,000 miles traveled in 2014, Florida, sure has a lot of traffic across its relatively limited 53,624 square miles of land.

Only ranked twenty-sixth in the US by land area, Florida really packs in the roads across those sunny miles. Some of that traffic might have to do with the fact that Orlando, FL attracts more visitors than any other amusement park destination in the country.

The Lone Star State ranks second in the US in traffic, size, and population. The saying “Everything’s bigger in Texas” rings true for the line to get there.

The largest parking lot in the world is located at the Dallas/Fort Worth airport, which is ironic since Texas highways must also be referred to as parking lots.

Although only the third-largest by area, the Golden State ranks first in the US for population and traffic. It’s not surprising that all five of the US cities with the most air pollution are in California considering 332,857,000 miles were traveled by vehicles here in 2014 alone.

According to Time Magazine, LA and San Francisco cause a 40-minute delay per 60 minutes driven during rush hour and about 83 total hours of delay annually for just a 30-minute commute. Telecommuting just became much more appealing. Before moving to a new state for a better job or warmer weather, consider all the things that could drastically change your life — including how much time you spend sitting in your car … while your car sits still on a major highway. This has been known to cause spikes in blood pressure.

There’s a lot that make our 50 states vastly different, and traffic is one of them.

Can you lower your car insurance payments? Find out below!

Most Dangerous States for Drunk Driving (early 2017)
2015 – Worst Drivers By State
New Concept Cars of 2012
What is the penalty for driving without insurance in Texas?