Most Dangerous States for Drunk Driving – 2016

Advertiser Disclosure: We strive to help you make confident insurance decisions. Comparison shopping should be easy. We partner with top insurance providers. This doesn't influence our content. Our opinions are our own. 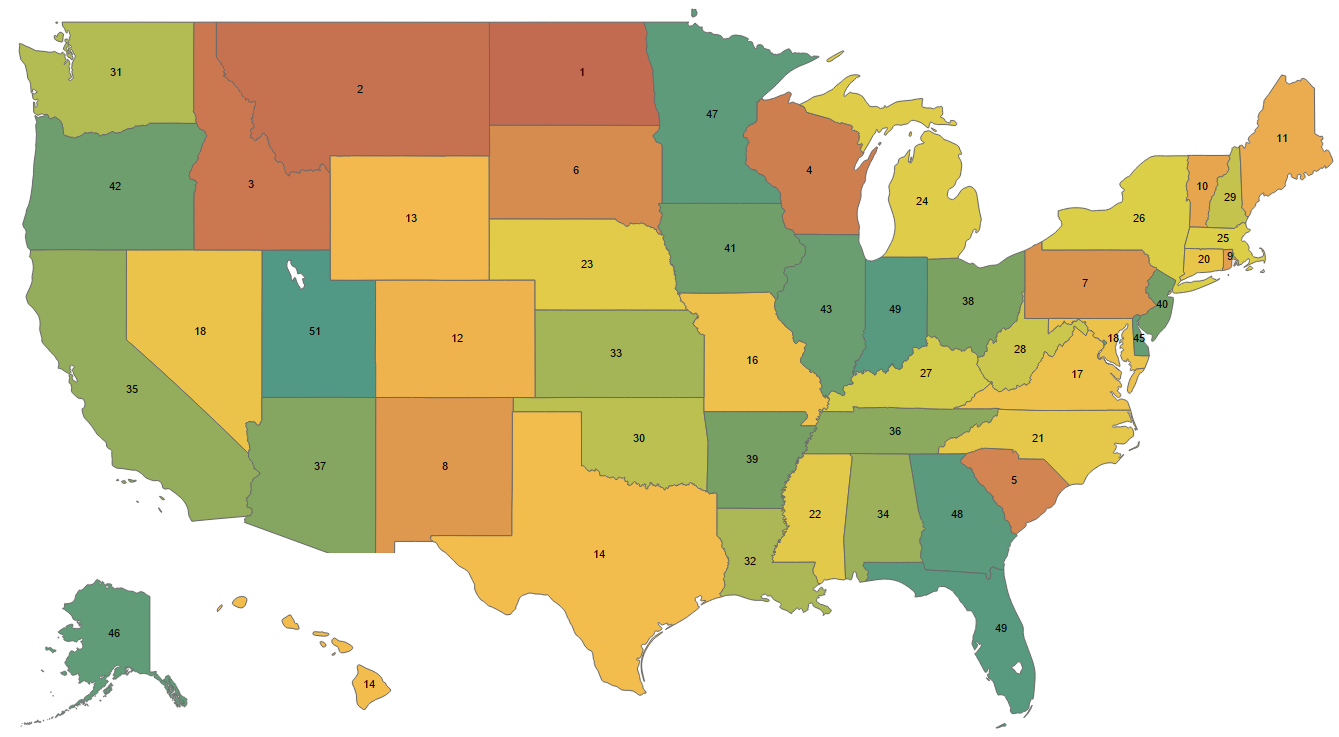 Have you ever found yourself on the road late at night, just wondering how many drunk drivers might be out on the road with you? Drunk driving is an expensive problem. But it’s not just about the money. We’ll never be able to calculate the cost of precious lives and the toll taken on those affected by the tragic loss of loved ones.

We’ve compiled stats from a number of sources to reveal where you’re most likely to run into a drunk driver, and we also found out how much you as a taxpayer are having to pay out of pocket because of drunk driving accidents in your home state.

States are always working to discourage drinking and driving with all kinds of enforcement policies, fees, penalties, and restrictions, but the responsibility will always be on the individual to choose not to endanger his or her own life, as well as the lives of others.

We have included 2 categories related to DUI Penalties and Types of Drunk Driving Laws to show you how the states compare when it comes to enforcement. Drunk driving is never worth the risk, and we can only hope that one day we will no longer have to worry about anyone driving under the influence! Perhaps self-driving cars will put an end to this issue once and for all.

The rankings for this study are based on statistics made available to the public by the Mothers Against Drunk Driving (MADD), National Highway Traffic Safety Administration, Federal Bureau of Investigation, KIDS COUNT Data Center, and DrivingLaws.org.

For example, the states with the worst rating for our DUI Arrests (total DUI arrests per population), North Dakota and South Dakota, each earned just 1 point in this category, and the state with the lowest arrests, District of Columbia, received a score of 51.

The lower the score, the worse the state’s drunk driver ranking.

For a complete breakdown, along with the specific sources used for each scoring criteria, click here, or you can view the rankings table and click here for more interactive graphics.

Even though the Green Mountain State is known for their scenic byways and highways, it turns out you might want to rethink driving them! Vermont ranks high for their DUI penalties but slides under the radar with their fatality rank.

Unfortunately, that wasn’t enough to keep them off our top 10 worst drunk driving states.

If you’re looking to flee the “big city” you might want to think twice about having Rhode Island be your weekend destination. Yes, their DUI arrests are few and far between, but unfortunately, they score high in our other categories.

For being such a small state, they came in pretty big for alcohol-related vehicle fatalities (#8 to be exact).To top that, the type of laws set in place to deter drunk drivers is quite lenient when compared to other states.

New Mexico’s official nickname—The Land of Enchantment—probably has nothing to do with their driving. New Mexico might have an insignificant rank when it comes to DUI arrests, but they boost themselves to #8 overall with their Cost per Fatality numbers.

Cost per Fatality is the average expense subsidized by each taxpayer. Evidently, paying for other people’s drunk driving gets expensive in New Mexico.

The birthplace of Hershey chocolate has nothing sweet about their drunk driving ranking. Even though that have a lower Cost per Fatality rank, they make it up in the other categories.

Not only did they make the top 10 for DUI penalties, but they also ranked at #7 for their Laws and Statutes against alcohol-related driving.

The famous faces on Mount Rushmore have everyone in this state thinking they need their own headshot. We’re not kidding either! South Dakota comes in at #1 for DUI arrests.

However, this isn’t the only factor contributing to their overall ranking. South Dakota was in the top 10 for the categories of Cost per Fatality and Laws and Statutes combating driving under the influence.

Unless South Dakota buckles down on drunk driving, they may be in the top 10 for years to come.

The people of South Carolina seem to be chugging more than just sweet tea.

Sadly, South Carolina is #3 for alcohol-related driving fatalities. Even though their DUI penalties will take a considerable chunk out of your finances, they have few laws combating drivers under the influence.

You may not be surprised that Wisconsin made it on the list. Historically, Milwaukee has been the Beer Capital of the World, so it is no surprise that they have quite a few checkpoints in place to prevent drunk driving.

But according to our study, their DUI penalties are not as steep as other states.

Normally, coming in third place is something to celebrate. However, when you’re one of the worst drunk driving states there is nothing to be proud of.

Idaho might have a low cost per fatality, but they rank pretty high elsewhere. They come in third for lenient DUI penalties and fifth for the most DUI arrests.

The Big Sky Country has a big problem – ranking #1 in two categories of our drunk driving feature. They have the worst Cost per Fatality and Laws and Statutes for alcohol-related driving. Besides coming in first place twice, they also position high on our other categories such as Fatality Rank.

Their best ranking was their DUI penalties, but coming in at #17 isn’t anything to boast about.

North Dakota is known for being the Heaven state. We’re not sure where they got that nickname from because our study shows they are far from perfect.

Similar to Montana, they came in first in two categories: Fatality Rank and DUI arrests. They even made #2 for Cost per Fatality. Looks like the police of North Dakota have their hands full!

Drunk driving may result in a fatality, which is the worst possible outcome. There could be one fatality or multiple fatalities; no destination is worth risking someone else’s life! Our Fatality Rank score was based on driving fatalities with a blood alcohol content of .01 or higher.

The ranking is based on a summation of two separate rankings:

Cost per Fatality by State

There are three serious outcomes from drunk driving:

According to 2011 data from MADD, “Drunk driving costs the United States $132 billion a year.”

This annual amount for drunk-driving is absurd – the projected total annual amount would be enough to purchase 3.77 million Tesla Model 3 vehicles!

Drunk driving is still being highly subsidized by every American – by taxes, higher insurance rates and victims having to deal with the emotional toll of injury or losing a loved one.

Let us fight to reduce the burden on the victims and their families, as well as the state taxpayers – please do not drink and drive!

This category was based on the total DUI arrests for both minors (under 18 years of age) and adults ( 18 years old and older) and then divided by the estimated population of each state.

The DUI penalties were based on jail time, licenses suspensions, and maximum fines for the first, second, and third drunk driving offense.

Repeat offenders should know better than to operate a vehicle while impaired; therefore, most states levy harsher minimum sentences for second and third offenses. If a state has no mandatory minimum sentence for an offense, the average for all the states that do have a minimum was added to states without a minimum.

States offenses with a “no mandatory minimum sentence” are highlighted in yellow in our data table for the reader’s viewing pleasure.

Laws regarding Vehicular Homicide and the .08 Per Se Law are enforced nationwide. There is a small correlation between the amount of types of laws and statues, and the amount of Drunk Driving related fatalities.

To better assess the truly most dangerous state, our team analyzed the collective data from our sources and compiled our study.

Each category, while pressing and indicative of how impacting drunk driving can be on a personal and state level, is not equivalent. Therefore, our team decided the best way to present the “Most Dangerous State” would be to funnel the rankings through weighted measures.

Each weight is representative of the severity of the category.

wpDataTable with provided ID not found!

Here are some trends we pulled from our study:

No “Quick Fixes” to the Drunk Driving Problem

Our study demonstrated there is no “silver bullet” to resolving drunk driving issues. DUI Penalities, DUI arrests, and the types of laws and statutes in place many not directly affect the outcome on fatalities and the cost to the taxpayers.

However, we applaud the states that are seeking to indirectly discourage impaired drivers from getting on the road. While the data shows categorical inconsistency, like South Carolina ranking well DUI penalties but #3 for DUI fatalities, there are certain states demonstrating that being tough on drunk driving does pay off!

Florida had one of the study’s most aggressive DUI penalties, and it showed when their fatality rank came in at #41 and their DUI arrests were #44.

States with Popular Destinations are not affected by Vacationers

We were surprised to find that states with a high influx of visitors were not in our top rankings. Popular spring break and vacation destinations such as Florida, California, Hawaii, and New York did not make our Top Worst Drunk-Driving States.

In reality, it was quite the contrary. With our top spots going to Montana, Idaho, and North Dakota, we can only blame the local’s alcohol consumption at this point.