The average rates for car insurance in Durham, NC, are $282.26/mo. North Carolina requires 30/60/25 in minimum liability coverage from all drivers.

Durham car insurance laws are set at the state level. They are enforced at the local level, however.

In years past, a driver whose Durham car insurance lapsed could expect to see an officer of the Highway Patrol or the local sheriff’s department coming to remove the license plate from their car.

That no longer occurs, but there are significant fines for driving without insurance.

Don’t get caught without insurance.

Our ZIP code comparison tool at the top of this page will compare car insurance companies and help you find the best rate.

Liability and personal property rates are set by the state’s insurance commission, but insurance companies establish their own rates for some areas such as theft and collision. It is this variation in Durham car insurance rates that makes regular comparison a critical, money-saving activity.

Which city you live in will have a major affect on car insurance. That’s why it’s vital to compare Durham, NC against other top US metro areas’ auto insurance rates.

These states no longer use gender to calculate your car insurance rates — Hawaii, Massachusetts, Michigan, Montana, North Carolina, and Pennsylvania. But age is still a large factor because young drivers are considered high-risk drivers in Durham. NC does not use gender, so check out the average monthly car insurance rates by age in Durham, NC.

Factors affecting car insurance rates in Durham, NC may include your commute, coverage level, tickets, DUIs, and credit. Controlling these risk factors will ensure you have the cheapest Durham, North Carolina car insurance.

Laws for Car Insurance in Durham

One long-standing benefit of the Durham car insurance laws established at the state level has been that North Carolina’s overall car insurance rates often have been lower than rates in other states.

North Carolina’s insistence that all drivers be insured contributed to Durham car insurance being available at somewhat lower rates than elsewhere in the country.

All of the land of the Research Triangle Park lies within Durham County.

Durham also has a strong tradition in manufacturing, particularly in the tobacco industry that originally funded several of the city’s best attributes, including various arts activities and Duke University.

The City of Durham

Four North Carolina cities are larger than Durham, and on a national scale, Durham is a medium-sized city of 251,893 according to the census estimates for 2014.

Durham’s population was 187,035 at the time of the 2000 United States census; its 2010 population represents an increase of 18 percent in a single decade.

The entire area has experienced rapid growth in the past several years, particularly in the capital city of Raleigh, only thirty miles away.

Durham has a diverse population, both ethnically and economically. At the time of the most recent census, the population of Durham was 41.1 percent white, 38.3 percent black, 12.7 percent Hispanic, and 4.5 percent Asian.

Durham is home to Duke University and North Carolina Central University. It has been known as the “City of Medicine” for decades, supported by the fact that it is home to the Duke University Medical Center, one of the world’s leading research and teaching hospitals.

Durham played a key role in our nation’s history.  Here are some highlights:

The Duke brothers turned to other pursuits in the early 20th century, founding Duke Energy and providing the endowment that would ensure the solid future of what would become Duke University.

Known today as the “Bull City,” the heritage of the bull arose with John Ruffin Green’s Bull Durham Tobacco Factory, which was the recipient of the many letters from former Union and Confederate soldiers searching for more Brightleaf tobacco.

Car insurance requirements are established at the state level. All drivers are required to have insurance to be legal drivers.

Thus, any one person injured in an accident must be covered for up to $30,000, the total maximum bodily injury coverage per accident is $60,000, and $25,000 is the maximum amount of property damage coverage.

All major car insurance companies licensed in the state of North Carolina maintain a presence in Durham. Some have local offices, but others operate only online. Others employ independent agents that represent several insurance companies.

There are dozens of insurance agencies with physical offices in Durham. One website lists 49 such agencies, and that is not a complete list. Most of the Durham car insurance agencies represent only one company’s products but others are independent and so represent two or more companies.

As Durham is not a very large city, there are fewer accidents than in larger towns. In 2013, there were 10,563 reported accidents of all kinds in Durham. Car insurance accident statistics will affect one’s rates!

Insurance is required in North Carolina. Durham’s size and character works well to minimize insurance costs, but individuals always should compare prices on a regular basis. Young drivers age out of high-risk groups, just as older drivers age into them.

One company may be able to produce a quote that is within the requirements of state law but is lower than another company’s price for the same coverage.

The difference lies in internal processes, algorithms, assumptions and other quote components specific to individual companies. Comparing rates among companies is always beneficial because a current provider likely will strive to meet a lower quote provided by a competitor.

In either case, the driver is the winner. Every Durham driver should seek an outside quote at least every year or two.

Compare car insurance quotes for FREE with our comparison tool! Simply enter your ZIP code at the bottom of the page now! 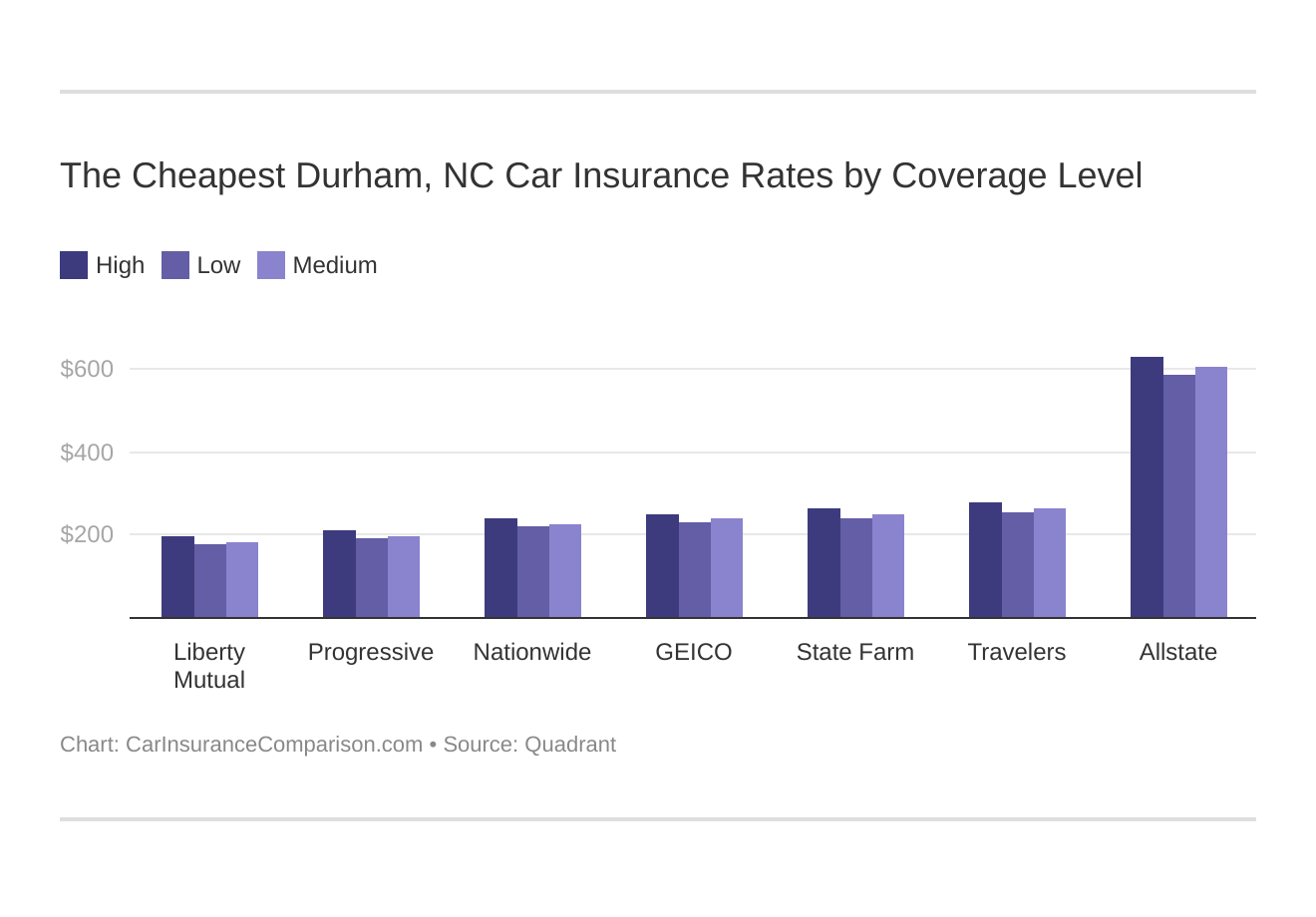 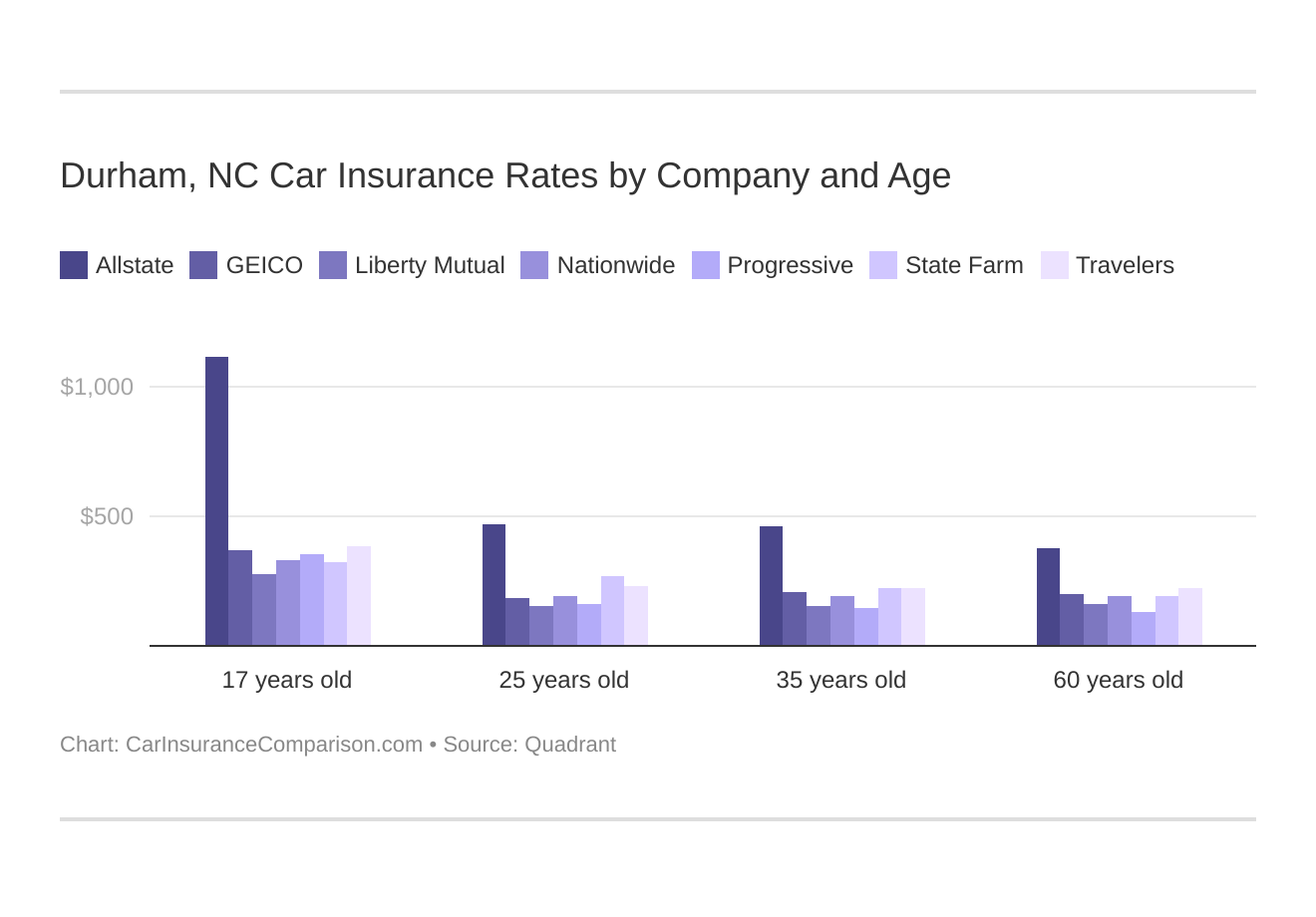 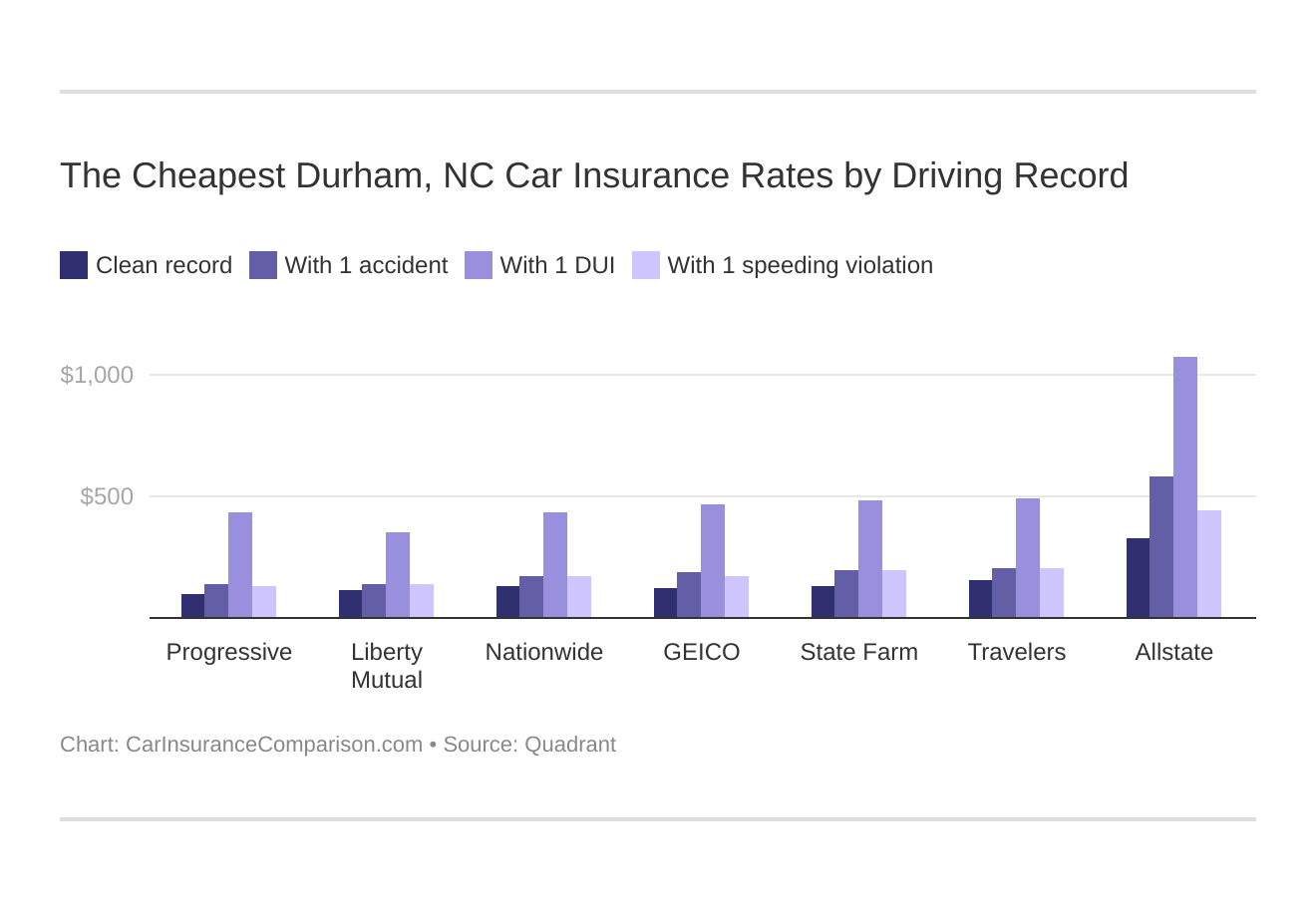